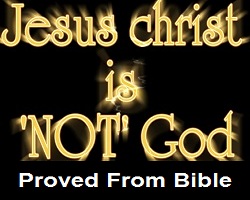 Jesus is not God. All four Gospels record Jesus as saying, “Blessed are the peace-makers; they will be called sons of God.”

The word ‘son’ cannot be accepted literally because in the Bible, God apparently addresses many of his chosen servants as ‘son’ and ‘sons.’ The Hebrews believed God is One, and had neither wife nor children in any literal sense.Therefore, it is obvious the expression ‘son of God’ merely meant ‘Servant of God’; one who, because of faithful service, was close and dear to God as a son is to his father.

Christians who came from a Greek or Roman background, later misused this term.In their heritage, ‘son of God’ signified an incarnation of a god or someone born of a physical union between male and female gods.This can be seen inActs 14:  11-13,  where  we  read  that  when  Paul  and  Barnabas  preached  in  a  city  of Turkey,  pagans  claimed  they  were  gods  incarnate.They  called  Barnabas  the Roman god Zeus, and Paul the Roman god Hermes.

Furthermore, the New Testament Greek word translated as ‘son’ is ‘pias’ and ‘paida’ which mean ‘servant’ or‘son’ in the sense of servant.’ These  are translated to ‘son’ in reference toJesus and ‘servant’ in reference to all others in some  translations  of  the  Bible.So,  consistent  with  other  verses,  Jesus  was merely saying that he is God’s servant.

To a Christian, God had to take human form to understand temptation and human suffering, but the concept is not based on any clear words of Jesus.In contrast,  God  does  not  need  to  be  tempted  and  suffer  in  order  to  be  able  to understand and forgive man’s sins, for He is the all knowing Creator of man.This isexpressed in the verse:

“And the Lord said: ‘I have surely seen the affliction of My people that are in Egypt, and I have heard their cry because of their taskmasters; for I know their pains.” (Exodus 3:7)

God forgave sin before Jesus’ appearance, and He continues  to  forgive without any assistance.When a believer sins, he is to repent sincerely in order to receive forgiveness.Indeed, the offer to humble oneself before God and be saved is made to all humankind.

Biblically, people can receive forgiveness of sins through sincere repentance sought directly from God.This is  true at all times and in all places.There has never been a need for the so-called inter cessionary role Jesusplays in attaining atonement.The  facts  speak  for  themselves.There  is  no  truth  to  the  Christian belief that Jesus died for our sins and salvation is only through Jesus. What about the salvation of people before Jesus? Jesus’ death neither brings atonement from sin, nor is it in any way a fulfillment of Biblical prophecy.

Christians claim that in the birth of Jesus, there occurred the miracle of the incarnation of Godin the form of a human being.To say that God became truly a human being invites a number of questions.Let us ask the following about the man-God Jesus:

*What happened to his foreskin after his circumcision (Luke 2:21)?Did it ascend to heaven, or did it decompose as with any human piece of flesh?

*During his lifetime what happened to his hair, nails, and blood that was shed from his wounds?Did the cells of his bodydie as ordinary human beings?If his body did not function in a truly human way, he could not be truly human as well as truly God.Yet, if his body functioned exactly in a human way, this would nullify any  claim  to  divinity.It  would  be  impossible  for  any  part  of  God,  even  if incarnate, to decompose in any way and still be considered God.The everlasting, one God, in whole or in part, does not die, disintegrate, or decompose: ‘For I the Lord do not change.’ (Malachi 3:6)

Did Jesus’ flesh dwell in safety after his death?

Unless Jesus’ body never underwent ‘decay’ during his lifetime he could not be God, but if it did not undergo ‘decay’ then he was not truly human.

Bible says that God is not man

Jesus is called a man many times in the Bible

The Bible says that God is not a son of man

Since God would not contradict Himself by first saying He is not the son of a man, then becoming a human being who was called ‘the son of man’, he would not have done so.Remember God is not the author of confusion. Also, human beings, including Jesus, are called ‘son of man’ specifically to distinguish them from God, who is not a ‘son of man’ according to the Bible.

The Bible says that Jesus denied he is God

Jesus did not teach people that he was God

The Bible says that God is greater than Jesus

Jesus cannot be God if God is greater than him.The Christian belief that the Father and son are equal is in direct contrast to the clear words from Jesus.

Jesus never instructed his disciples to worship him

If Jesus was God, he would have sought worship for himself

About Jesus is not God. Since he didn’t, instead he sought worship for God in the heavens, therefore, he was not God.