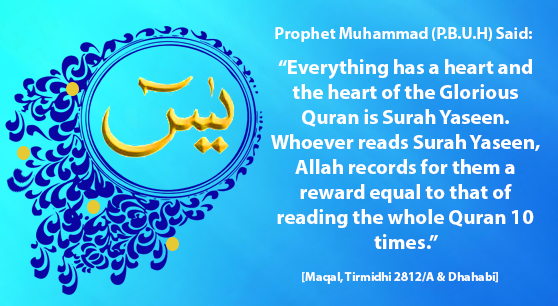 Quran is the greatest marvel and blessing of Allah Almighty, which He has bestowed upon mankind. In this Book, a person can find solution to any problem and answer to all the questions provided that a person views and analyzes it objectively. It carries numerous intellectual, political, social, moral and guidelines related to every aspect of life for a non-believer, however, for a believer it contains greater promises.

For a believer there is reward against each word of Quran that is recited. This recitation of The Holy Quran in addition to adding religious reward also influences on the life of a person in numerous ways. Moreover, besides the general text of Quran, there are special and more reverend chapters compared to others. One of such parts of Quran is the Surah Yaseen.

Surah Yaseen is one of the most reverend Surah of Quran and Muslims all over the world memorize it, recite it, and listen to its recitation with great respect and sanctity. There is a reason behind the greater prestige of Surah Yaseen as it is mentioned by Prophet Muhammad (PBUH) in His various hadiths entailing numerous benefits of its recitation. The lines below discuss the major benefits of reciting Surah Yaseen.

Prophet Muhammad (PBUH) said in one of His hadiths in the following way:

“Surely everything has a heart, and the heart of the Quran is Yaseen. I would love that it be in the heart of every person of my people.” (Tafsir-al- Sabuni Vol.2)

From this hadith of Prophet Muhammad (PBUH) it becomes clear that like all other things that have a heart, Quran also has a heart and it is Sura Yasin. From this a person can only guess the importance of Yaseen, as if a single word from Quran carries great reward then the heart is surely to reward more and greater than that. Moreover, the other thing that becomes clear from this hadith is the fact that Prophet Muhammad (PBUH) showed His likeness for the memorization or remembrance of Yaseen by His followers.

Another great advantage or benefit of reciting Sura Yaseen is mentioned in the following hadith of Prophet Muhammad (PBUH):

“Whoever recites Yaseen once, Allah will record the reward of reciting the Quran ten times.” (Tirmidhi 2812/A)

This hadith does not require any explanation as it is clear from it that reading Yaseen once is equivalent to reciting of Quran ten times. Therefore, all the more reasons for a Muslim to memorize Surah Yaseen so that it can be read couple of times in a day to get grand rewards the worth of which is even beyond human comprehension.

“Indeed in the Noble Quran there is a Surah, for its reading will intercede and will be a means of forgiveness for listener. Listen carefully, it is Surah Yaseen, in the Torah it is called Muimmah.”

It was enquired, “O’ Messenger of Allah, what is Muimmah?”

“It contains for its reader the benefits of this world, it removes from him the dread of the next life, and it is called Dafiah and Qadhiyah.”

It was asked again, “How is this Surah Dafiah and Qadiyah?”

This hadith of Prophet Muhammad (PBUH) explains the magnanimous and diverse range of benefits it carries. Moreover, the intercessional benefits of it are not limited to the person who recites it only, rather the benefits also take into consideration the person who listens to it and who uses Surah Yaseen in the unconventional way of writing it and drinking it. Therefore, no matter in whichever way Surah Yaseen is interacted with, it results in opening the doors of countless blessings and benefits for a believer.

4. For The Dying Person:

Prophet Muhammad (PBUH) said in one of His hadiths:

“Recite Yaseen on those who are dying.” (Dawud)

From this hadith it becomes clear that Surah Yaseen is a recommendation pertaining to attending of a dying person. A person who is dying needs comfort and some kind of spiritual help to pass on to the next world with ease, therefore, at such a time if there is the Heart of Quran being recited, it surely helps the dying person and brings ease and peace to the excruciating process.

Regarding the forgiveness benefits of Surah Yaseen, Prophet Muhammad (PBUH) said the following:

“Whoever recites Surah Yaseen at night seeking the pleasure of Allah, that night he will be forgiven.” (Abu Nuaym)

This hadith also makes it clear that  if Surah Yaseen is recited with true and pure intentions of pleasing Allah Almighty, then the ultimate result is the person who recites it during the night will wake up free of sin the next morning. Therefore, if a believer ensures reciting Surah Yaseen before going to sleep and thinks in his heart and mind that it is done for the pleasure of Allah Almighty, then he or she should remain confident that their sins will be forgiven while they are asleep.

In a nutshell, Surah Yaseen is undoubtedly one of the most reverend, prestigious and benefits bringing Surahs of Quran. Therefore, if a Muslim wishes to attain benefits of all kinds from Quran recitation, then it is imperative that he or she makes recitation of Surah Yaseen a part of everyday life. In this regard memorization of Surah Yaeen can help a great deal with regards to its recitation.