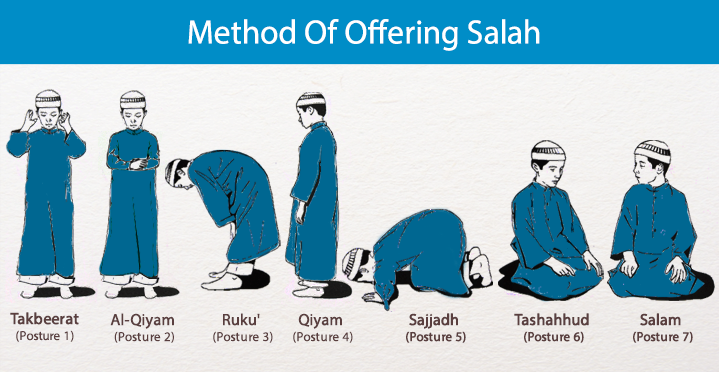 For a Muslim the importance of Salat or Prayer does not require any introduction or endorsement. It is one of the five pillars of Islam and the importance of it is as imperative as any other pillar or moral obligation made mandatory by Islam. Hence, in order to be a true and practicing Muslim, it is imperative that  one says prayers regularly five times a day.

a Muslim needs to ensure before starting a prayer. This post will discuss the major element that a Muslim must know about pertaining to Salat in order to ensure that the Salat is said in the proper way and in the best manner possible.

Wudu or ablution is a necessary element that needs to be performed before saying Prayer. The ultimate purpose of Wudu is to make a person pure and ready to stand in the court of Allah Almighty with no impurity on the body or anywhere else. Pertaining to Wudu, it is mentioned in Quran:

“O ye who believe! When ye prepare for prayer, wash your faces and your hands (and arms) to the elbows; rub your heads (with water); and (wash) your feet to the ankles. If ye are in a state of ceremonial impurity, bathe your whole body. But if ye are ill or on a journey, or one of you cometh from offices of nature, or ye have been in contact with women, and ye find no water, then take for yourselves clean sand or earth, and rub, therewith your faces and hands. Allah doth not wish to place you in a difficulty, but to make you clean, and to complete His favor to you, that ye may be grateful.” (5:6)

From this ayah of Quran, besides other things the one thing that becomes clear is the mandatory elements of Wudu. As per this ayah, there are four mandatory components of Wudu and that are:

Thus, before saying prayer a Muslim needs to perform ablution and a Muslim should never consider this activity a kind of discomfort or difficulty, rather the objective of it is to help Muslims purify and be ready to stand in front of Allah Almighty.

In Islam, there are prayers five times a day. Therefore, the distribution of prayers throughout the day means that the time of the day is of importance and that very prayer should be said on that very time. Hence, it is imperative that a Muslim must know about the right time of saying all the five prayers. In Quran Allah Almighty says in this regard in the following way:

From this ayah of Quran it becomes clear that prayers are to be said at their respective times, therefore, a Muslim must know about the Fajr prayers time, when it is to be said, when till is the Fajr time valid and so for all the other prayers as well. Hence, the knowledge of time of prayers is another factor to keep in mind.

Fajr- The Fajr prayer consists of the following Rak’ats:

Zuhr- The Zuhr prayer consists of the following Rak’ats:

Asr- For the Asr prayer, there are following Rak’ats:

Maghrib- For the Maghrib prayer the Rak’ats distribution is as follows:

Isha- The number of Rak’at in Isha prayer and their distribution is as follows:

When a Muslim begins Salat and is in the state of Qiyam, it is mandatory to recite Quran, however, in this recitation the first part and which is the mandatory part for all the rak’ats of all the prayers is the recitation of Surah Fatiha. Regarding this, Prophet Muhammad (PBUH) said:

“There is no prayer for the one who does not recite the Opening of the Book.” (Bukhari)

Therefore, in addition to remembering and memorizing other parts of Quran that need to be recited after Surah Fatiha, it is imperative that a Muslim memorizes Fatiha before anything else and then in every Rak’at after Takbeer recite this Surah and then move on with the later part of Qiyam. If you are someone who is unable to read and recite Quran in Arabic, you are less likely to enjoy your prayers with due respect. Therefore, you are highly advised to arrange a Quran teacher from QuranReading.com who will teach you on how to effectively read Quran with proper recitation.

When starting Salat it is imperative that the Muslim faces towards Qibla. It is the Ka’bah towards which every Muslim is instructed to face when saying prayer. In this regard, Allah Almighty says in Quran:

“Thus have We made of you an Ummah justly balanced. That ye might be witnesses over the nations and the Messenger a witness over yourselves; and We appointed the Qiblah to which thou wast used, only to test those who followed the Messenger from those who would turn on their heels (from the faith). Indeed it was (a change) momentous except to those guided by Allah. And never would Allah make your faith of no effect. For Allah is to all people most surely full of kindness, Most Merciful.” (2:143)

From this ayah it is clear that Allah Almighty has appointed Qiblah as a direction to test the faith of the people at that time. For present people, facing Qiblah stands for the unity that exists among the Muslims as they all point towards one direction while praying, no matter whichever part of the world they belong to and whatever the time in their specific time zone.

In Islam, the place for prayers is a mosque. It is a place where Muslims are instructed to gather and say prayer in the form of congregation. Although there is excuse for people who have some general problem and because of that problem, they are not able to go to the mosque or offer prayer with the congregation, however, for general people who are fit and healthy and have no such excuse, for them it is imperative to go to the mosque and offer prayer with congregation. Regarding this, the hadith of Prophet Muhammad (PBUH) says the following:

From this hadith the importance of saying prayer in the mosque with congregation becomes clear. Prophet Muhammad (PBUH) who is known for His mercy and compassion, if He has said something about those who do not go to the mosque, then it means that it is a matter of grave importance and every Muslim must make sure that prayer is offered in the mosque with congregation. Although, women have relaxation in this regard and they can offer prayer whilst staying in their homes.

Most of the Muslims going through this post may have already knew the method of Salaah. However, you are still advised to dig deeper and analyze your way of saying Namaz. Because, it is the Ibadah that helps you communicate with your Lord. If you are not doing it correctly, you are likely to be missing  the right connection with Allah.