Warning: Use of undefined constant ‘change_graphic_lib’ - assumed '‘change_graphic_lib’' (this will throw an Error in a future version of PHP) in /home/islakxah/public_html/wp-content/themes/peace/functions.php on line 855
 Change of the Qibla - Islamic Lines 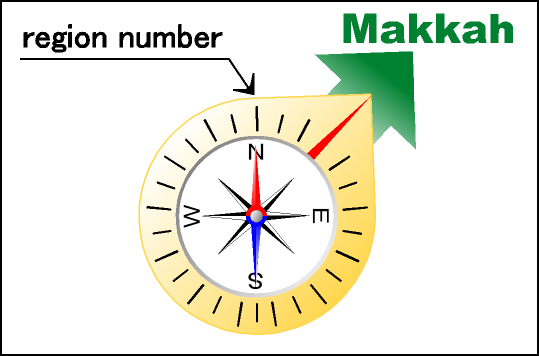 About change of the Qibla. The Prophet (sallallahu `alayhi wa sallam) as well as the Muslims had been facing towards Jerusalem while worshipping, that is, they regarded it as housing the Qiblah.(44) Such a practice was followed for one year and four months after migrating to Madeenah. It was the Prophet’s (sallallahu `alayhi wa sallam) desire that the K’abah be made the Qiblah for prayers as did the other Arab converts to Islam, for they had been holding the sanctuary at Makkah in a reverential regard since time immemorial. To them the house of worship built by Ibrahim and Ismail (‘alaihima salaam) was the holiest of the holy ones, incomparable in sanctity to any other sanctum or shrine. They were put to a severe test by being asked to face Jerusalem instead of the K’abah and they withstood this trial by dutifully obeying the divine command. Such was their devotion to the Prophet (sallallahu `alayhi wa sallam) that they always replied, whether they found anything to their linking or not:

Thus, after the faith of the earliest Muslims had been brought to a test and they had defied it successfully, the Qiblah for the prayer was changed to the K’abah.

The Muslims changed their direction promptly in prayer, in compliance with divine command, towards the K’abah which was henceforth selected as the Qiblah for all the believers, living in any part of the World, for all times to come. (See Sihah Sittah and the Qur’anic verses relating to the change of the Qiblah).

It preyed upon the minds of the Jews that Islam had established itself in Madeenah and was making rapid strides day after day. They were sane enough to realize that if the popularity of Islam continued unabated for an extended period of time, it would be difficult for them to stand up against their potential enemies. So they decided to put up a front against the Muslims and launched a campaign to slight, vilify and ridicule them. The Muslims, were however, not permitted to return the tirades hurled against them. They were still commanded to be patient and forbearing as evidenced by the Qur’anic verse that says “Withhold your hands, establish worship” (Qur’an 4:77). Such was the code of behavior enjoined upon them so that they might learn to disdain the world and its pleasures, become self-denying, get prepared to make nobler sacrifices, experiencing in the end obedience to Allah’s commands.

The Lessons And Examples Can Be Taking From This Period As Follows:

When he arrived in Madeenah, the first thing he did was build a mosque.This indicates the importance of a mosque in Islam. All acts of worship (ibaadah) in Islam are for the purification of the soul, refinement of mores, and strengthening of the ties of mutual cooperation among the Muslims. The congregational prayers and the Friday and Eid prayers are strong examples of the nature of the Muslim community and in the unity of their opinions, goals, and cooperation in achieving righteousness and in fearing Allah.

Thus, if this is the case with the acts of worship, it is without doubt that mosques play a great social and spiritual role in the lives of the Muslims. The mosque is the place that unites them and their efforts. It refines their souls and awakens their minds and hearts. It solves their problems. The mosque shows their strength and cohesiveness.

The history pertinent to the mosques in Islam has proved that from them emanate Islam’s great armies of Islam which rush to fill the earth with Allah’s guidance. From the mosques the beams of the light of guidance emerge for the Muslims and others. Inside them, the seeds of Islamic civilization are nurtured to finally develop and grow.

Is it not true that Abu Bakr, Umar, Uthman, Ali, Khalid, Saad, Abu Ubaidah, and their ilk who are from among the greats of Islamic history were but students of Muhammad’s school which was headquartered in the Prophet’s mosque?

Another special characteristic of the mosques in Islam is that the word of truth originates from them every week through the tongues of the preachers. The topic may be about forbidding evil and enjoining good or an invitation to some good, an awakening for the heedless, an invitation to assembly, objections to a wrongdoer, or a warning about a tyrant. We witnessed, when we were still children, how the mosques were used as centers of the nationalist movements against the French occupation. From the mosques also came the leaders of Jihad against colonialism in general and against Zionism (Israel) in particular.

If we see the mosques crippled and not living up to their great role today, it is due to the fault of some of their paid preachers, mercenaries or the ignorant ones. Only when the strong leaders and the scholars of Islamic legislation, sincere to Allah and His Messenger (sallallahu `alayhi wa sallam), stand up to give advice to the leaders and common Muslims and ascend the pulpits and lead the prayers, will the mosque reclaim its leading position in the Islamic society. The mosque will return to its role in raising real men, producing heroes, effacing corruption, fighting evil and building or reforming the society as a whole anchored upon the fear and love of Allah alone. We are all looking forward to the day when this happens, Allah willing, when the vanguard of our purified, believing youths, who are immersed in Allah’s religion and who behave with the Prophet’s (sallallahu `alayhi wa sallam) manners, fill to the brim the pulpits and the spaces of the mosques.

Those who deny that Islam has its own system of social justice are those who do not want the light of Islam to dazzle the sights of the people and dominate their hearts. Or they are the stubborn ones who resist to changes even if the people approve of these modifications which are in consonance with Islam.

As a result, the Islamic state, no matter in which place or era it is instituted, is to be based upon the most upright and just principles which today match the most noble parameters upon which states are built and under whose shadow the people of these countries are living.

Trying to establish states in our Islamic society based on Islamic foundations is an action consistent with the development of human thought concerning what a government should be. Furthermore, it allows the Muslims the construction of a society which is the strongest, most complete, most civilized and happiest of all.

No matter what the case may be, it is for our own good to establish a state among ourselves, which is based on the foundation of Islam. Refraining to do so seals our destruction and ruin. Islam does not harm the non-Muslims in the Islamic world. It does not oppress their beliefs nor lessen their rights.

So, what is fearful or wrong with obliging the states in Islamic countries to apply Islamic legislation and establish its laws, especially if these laws are based on justice, truth, strength, brotherhood and collective social cooperation thriving on the foundations of brotherhood, love, and noble cooperation? We will never rid ourselves of foreign occupation except by believing in Islam. For that goal, therefore, the believers and preachers must deliver the goods, surmount some Herculean obstacles or simply have to work double time.

“And if the people of the townships had believed and kept from evil, surely We should have opened for them blessings from the sky and from the earth.” [Qur’an 7:96]

“That is my straight path so follow it and do not follow the other paths that deviate you from His paths.” [Qur’an 7:153]

“And whosoever has taqwa of Allah will have an escape created for him and he will be provided for from where he does not reckon. Whoever puts his trust In Allah, He is sufficient for him. Allah is in control of all affairs and He has established a measure for everything.” [Qur’an 65:2]

“And whoso keeps his duty to Allah, He will remit from him his evil deeds and magnify reward for him.” [Qur’an 65:5]

About change of the Qibla. [44] Lit. Anything opposite. The direction in which all Muslims must pray, whether in their private or in their public devotions, namely, towards, K’aba.