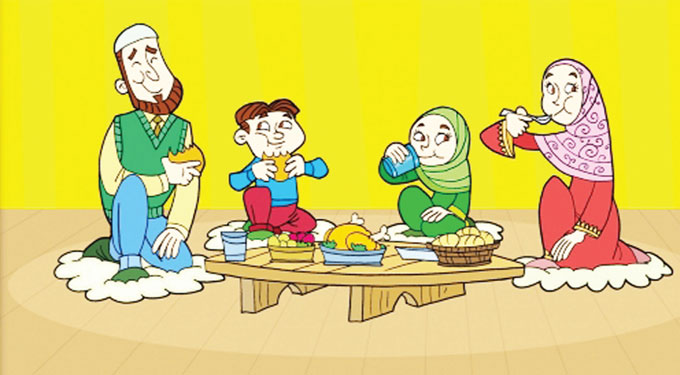 THE IMPORTANCE OF EATING MANNERS
Eating manners are very important since it is repeated many times every day. It must be done properly whether eating alone, with family, or with friends. To avoid pretenses, you should train yourself in proper eating manners, whether alone or with your family. It will then become a natural part of your behaviour, and you will be at ease at the table.

THE MANNERS OF EATING
There are certain table manners that are indispensable. Say ‘Bismillah’ when starting, to thank Allah and say ‘Alhamdulilah’ when finished. Eat what is in front of you. Eat using your right hand. A hypocrite was eating with his left hand when the Prophet saw him and advised him to eat with his right. The man falsely said ‘But I cannot’ The Prophet said ‘May it be so’ and the hypocrite was not able to lift his right hand again.

The companions of the Prophet followed his example in stressing the use of the right hand while eating. Omar was Khalifa when he saw a man eating with his left hand and similarly advised him to eat with his right. The man answered ‘My right is busy’ Omar repeated his request and the man repeated his answer. Omar asked him ‘What is it busy with?’ The man answered that it had been severed in one of the battles. Omar blamed himself for neglecting such handicap and ordered the treasurer to provide the man with a servant to help him.

If eating with your hand, use three fingers with small bites, lifting it gently with ease to your mouth. Close your mouth while eating to avoid unnecessary noises. To eat on the floor is nearer to what the Prophet used to do. However, there is no problem to eat at a table. Imam Ghazali said, ‘To eat at a table is to make eating easier and there is nothing against that.’ Do not start eating ahead of the elders or the nobles. If you are the elder, do not commence eating before everyone is at the table.

It is preferred that eating should not be conducted in silence. It is good manners to talk during meals. Topics should be nice stories suitable for eating. At the end of the meal, if hands are to be washed, the elder or the noble should be asked to proceed first.

At the end of a meal, thank Allah as in the Hadith reported by Abo Dawood and Nasa’i in ‘the deeds of day and night.’ Thank Allah who fed us and provided us with drink. It is very appropriate to make a prayer for your hosts as it is reported by Muslim that Al-Migdad ibn Al-Aswad reported that the Prophet said, ‘May Allah feed those who have fed us, and provide drinks to those who provided us with it.’

Do not express your disapproval or dislike of certain foods. Either eat it or pass it over quietly. Abu Huraira reported that ‘the Prophet never expressed his dislike of a food. If he liked it he will eat it. If he disliked it, he will set aside.’

Do not put in your plate more than can eat. Leftovers could be thrown out, it shouldn’t, and wasted. Put smaller portions twice rather than one large portion that you will not eat. The Prophet did not approve of leaving any food in a plate since as he said ‘You don’t know which portion is blessed’. Food is a blessing of Allah, to misuse it is contrary to Islam. Do not forget the poor and the needy who do not have the portion you are throwing away

THE MANNERS OF DRINKING
Drinking manners are no less important. To start in the name of Allah is a must. Use your right hand to drink. Abo Dawood and Tirmizi related that Hafsa (RA) said ‘the Prophet used his right hand for eating and drinking. He used his left for other things [such as personal hygiene].’ Do not pour your drink down your throat in one gulp. Drink it in three sips. Ibn Abbas reported that the Prophet said ‘Do not drink like a camel. Drink twice or thrice. Say the name of Allah before drinking. Thank Allah after finishing.

Do not exhale in your glass. This will irritate others and will smudge the glass or the cup. Ibn Abbas reported that the Prophet forbade exhaling in a glass or puffing into it.

Do not drink directly from the jug or the container. Beside being unhygienic behaviour, others may want to drink after you who could be irritated. Abo Huraira narrated that the Prophet forbade drinking directly from the mouth of the sheepskin or the flask.

AVOID GLUTTONY
Modesty is the crown (hallmark) of the common people. Keep this crown on your head if invited to a feast or if you are presented with food or drink. Do not be gluttonous devouring food as if you have not eaten for a long time, or as if you have not seen such excellent food before. Do not sample every dish on the table. People, even generous hosts disapprove of greedy eaters. Be reasonable and moderate in enjoying the generosity of your hosts.

GOLD AND SILVER CUTLERY
Do not eat using golden or silver plates or cutlery. This goes against the spirit of Islamic modesty. Pomposity is not an Islamic trait. Bukhari narrated that Huzaifa said the Prophet said ‘Do not drink in golden or silver cups nor eat in such plates.’ If you were a guest, simply ask your host to replace it with another one.