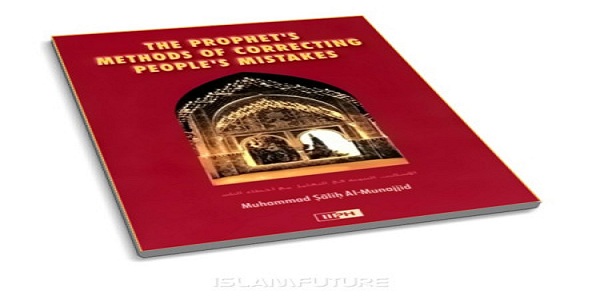 Mistake is a part of human nature, Islam seriously admires someone who benefit others by teaching them how to correct their mistakes. Allah sent knowledge to prophet Muhammad through his angels, the blessings of teaching are immense. Allah’s angels and the whale in the sea will pray for the one who teaches people the ways of good. Correcting mistkes is also a part of education,  and the duty of all Muslims.

The Qur’aan brought commands and prohibitions, approvals and denunciations and correction of mistakes.

“(The Prophet) frowned and turned away,

Because there came to him the blind man [‘Abd-Allaah ibn Umm Maktoom, whilst he was preaching to one or some of the chiefs of Quraysh],

But what could tell you that perchance he might become pure (from sins)?

As for him who thinks himself self-sufficient,

To him you attend;

What does it matter to you if he will not become pure (from disbelief, you are only a Messenger, your duty is to convey the Message of Allaah).

But as to him who came to you running, And is afraid (of Allaah and His Punishment), Of him you are neglectful and divert your attention to another.” [‘Abasa 80:1-10]

“And remember when you (Muhammad) said to him (Zayd ibn Haarithah – the freed slave of the Prophet) on whom Allaah has bestowed Grace (by guiding him to Islam) and you (too) have done a favour (by freeing him), ‘Keep your wife to yourself and fear Allaah.’ But you did hide in yourself (what Allaah had already made known to you – i.e. that He will give her to you in marriage) that which Allaah will make mainfest, you did fear the people whereas Allaah had a better right that you should fear Him…” [al-Ahzaab 33:38]

“Not for you (O Muhammad) is the decision; whether He turns in mercy to (pardons) them or punishes them; verily, they are the zaalimoon (polytheists, disobedient, wrong-doers, etc.).” [Aal ‘Imraan 3:128]

Prophet Muhammad also used to correct the mistakes of sahaba.

“O you who believe! Take not My enemies and your enemies (i.e., disbelievers and polytheists, etc.) as friends, showing affection towards them, while they have disbelieved in what has come to you of the truth, and have driven out the Messenger and yourselves (from your homeland) because you believe in Allaah your Lord! If you have come forth to strive in My Cause and to seek My Good Pleasure, (then take not these disbelievers and polytheists, etc., as your friends). You show friendship to them in secret, while I am All-Aware of what you conceal and what you reveal. And whosoever of you (Muslims) does that, then indeed he has gone (far) astray, (away) from the Straight Path.” [al-Mumtahinah 60:1]

“… until (the moment) you lost your courage and fell to disputing about the order, and disobeyed after He showed you (of the booty) which you love. Among you are some that desire this world and some that desire the Hereafter…” [Aal- ‘Imraan 3:152]

Prophet Muhammad also stayed away from his wives for correcting their mistakes and for teaching them discipline. People were spreading rumors that prophet has divroced them, Allah replied them with these words:

“When there comes to them some matter touching (public) safety or fear, they make it known (among the people), if only they had referred it to the Messenger or to those charged with authority among them, the proper investigators would have understood it from them (directly)…” [al-Nisa’ 4:83]