HomeIslamic knowledge Personalities That Hold An Important Stature In Islam 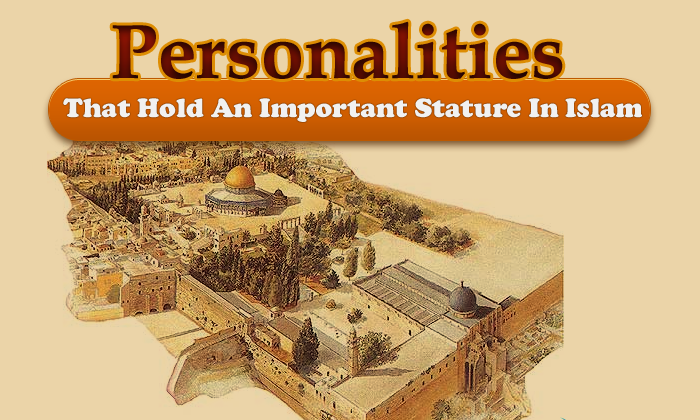 Every cultural or social movement has some major personalities who contribute to the progression and effectiveness of the movement. Although the masses are involved in the movement, however, the important personalities are the ones who impact that movement and move the people in the right direction.

The arrival and spread of Islam is one of the greatest movements the world has ever seen. People think that the message, which Islam conveyed, or the establishment and progress in the movement happened when Prophet Muhammad (PBUH) arrived and started spreading Islam. However, the fact is that the movement was initiated from the birth of Adam and till the arrival of Prophet Muhammad (PBUH) different personalities contributed to it.

The lines below give the different categories of Personalities that hold an important stature in Islam.

Since the birth of mankind, Allah Almighty has been sending Prophets for humans till the arrival of Prophet Muhammad (PBUH) with whom the process ended. The different Prophets that are reckoned in Islam are:

Adam (AS) – He was the first human being and the Prophet sends by Allah Almighty to the world for the spread and guidance of mankind. For Muslims, Adam is the father of all the humanity.

Ibrahim (AS) – He is considered one of the greatest Prophets in the line of Prophets. In Islam, he is remembered and revered in the form of the festival of Eid-ul-Adha, where Muslims sacrifice an animal in memory of the deed of Ibrahim (AS) where he was willing to offer his son Ismail (AS) to Allah Almighty, but Allah changed it with an animal.

Musa (AS) – He was the Prophet of Allah Almighty whom he sent upon the nation of Bani Israel. He was given the Divine Book Torah.

Dawud (AS) – He was the King of Israel and brought message of Allah The Great to the Israelites.

Isa (AS) – After Prophet Muhammad (PBUH), he and his Mother are the most discussed personalities in Quran. According to Islamic preaching, Allah gave him Gospel and he was the founder of Christianity.

Muhammad (PBUH) – Above all the one name that is synonymous with Islam is Prophet Muhammad (PBUH). He is the founder of Islam and the bringer of the most complete and knowledge rich book – the Quran.

Besides who were sent to mankind in human form, there are angels as well who from the very beginning have been a means of communication between Allah and the Prophets. Moreover, in Islam different angels have different responsibilities as well. The commonly known angels in Islam are:

Jibrail- He is the Chief of all the Angels and is the one responsible for bringing down the revelation and important messages of Allah Almighty to Prophet Muhammad (PBUH). He is also the one who told Maryam (AS) that she will be expecting a son Isa (AS).

Mikail – In Islam he is the angel responsible for guarding the gates of Heaven so that Shaitan does not enter it.

Israfil- He is the one responsible for the Day of Judgment, where his blowing of trumpet will mark the end of the world and the start of Judgment Day proceedings.

Izrail- He is responsible for capturing the soul of a person at the time of death.

With the arrival of Prophet Muhammad (PBUH) the message of Islam started to disseminate officially. During this process, there were different personalities who played a major role in forming history and spreading of Islam. The lines below give the major historical figures remembered and revered among Muslims pertaining to initial days of Islam.

Abdullah (RA) – He was the father of Prophet (PBUH) who died before His birth.

Amina bint Wahb (RA) – She was the mother of Prophet (PBUH) and died when He was only 6 years old.

Abd al- Muttalib (RA) – He was the grandfather of Prophet Muhammad (PBUH). At the age of 6, when Prophet (PBUH) became an orphan, he took him in and raised him for two years, after which he died.

Abu Talib (RA) – He was the Chief of Hashemite Clan and uncle of Prophet (PBUH). After the death of grandfather of Prophet (PBUH) he protected Him from the Makkans when He made His message public.

Umar (RA) – Initially a fierce enemy of Islam, but later he converted to Islam and became an exemplary Muslim. He became the second Caliph of Muslims after Abu Bakr (RA) passed away.

Uthman (RA) – He was also one of the great companions of Prophet (PBUH) and after the death of Umar (RA) he became the third Muslim Caliph.

Bilal (RA) – He was the first mu’adhin of Islam as on the orders of Prophet (PBUH) he was the one who gave the first adhan. Initially he was a slave who was freed by Abu Bakr (RA).

In short, the Islamic history is rich with different personalities who contributed in bringing this amazing, peaceful and loving message of Islam to humanity that tells us the way of living life in a way so that we enjoy the best in both the worlds.

May Allah Almighty help us all take a leaf out of the book of all these great personalities and help us become a better Muslim. Ameen!