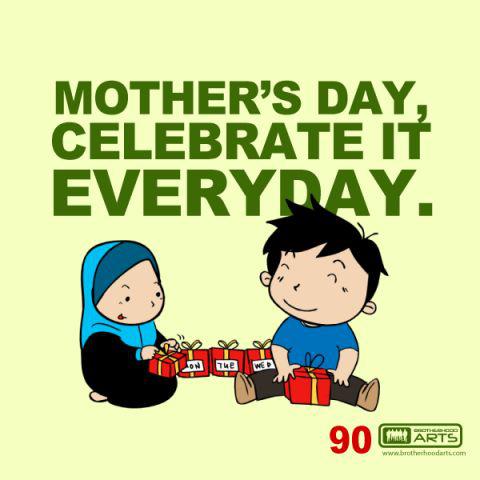 Praise be to Allah…

Celebrating Mother’s Day in Islam is an innovated matter which the Prophet {Sallallahu Alayhi Wa Sallam} and his companions {RA} did not do. It is also an imitation of the kuffaar from whom we have been commanded to differ. Hence it is not permissible to celebrate it or to obey one’s mother in that, because the Prophet {Sallallahu Alayhi Wa Sallam said:

“There is no obedience if it involves sin; obedience is only in that which is right and proper.”

He should continue to honour her and treat her with kindness, and keep trying to convince her that this celebration is a newly invented innovation. The Prophet {Sallallahu Alayhi Wa Sallam} said:

“The worst of matters are those which are newly-invented, and every innovation is a going-astray.”

The mother is entitled to respect and honour, and upholding of the ties of kinship throughout her life, so what is the point of singling out a particular day to honour her?

Moreover, this innovation has come to us from societies in which disobedience towards parents is widespread, in which mothers and fathers can find no refuge except old people’s homes, where they are left alone and no one visit them, and they spend their time in pain and sorrow. So they think that honouring their mothers for one day will erase the sin of their disobedience towards her during the rest of the year.

A mother’s right is greater than having just one day in the year to be honoured, rather the mother’s right over her children is that they should take care of her and obey her, so long as it does not involve disobedience towards Allaah, at all times and in all places.

And at last I want to draw an end by quoting from Glorious al-Quran:

“This day, I have perfected your religion for you, completed My Favour upon you, and have chosen for you Islam as your religion”

And Allaah Knows the Best.