Warning: Use of undefined constant ‘change_graphic_lib’ - assumed '‘change_graphic_lib’' (this will throw an Error in a future version of PHP) in /home/islakxah/public_html/wp-content/themes/peace/functions.php on line 855
 Birth Of A Girl In Islam - Islamic Lines

HomeBoys & Girls Society Birth Of A Girl In Islam 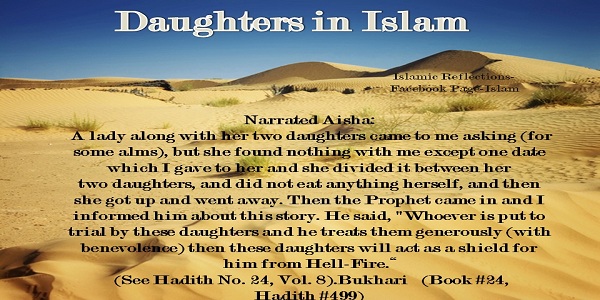 The Blessing of Having Daughters

Birth of a girl in Islam. The girls are creatures of natures that are made of tender heart and soul. The  passionate feelings of love and kindness is bestowed upon them. Daughters are different from sons,  they remain always loyal to their mother and father. Their fondling and longing would never vanish despite of getting fledged. No doubt the daughters bring the solace of womanhood and provide the care and affection to the family members.  She can be a loving younger sister, or a caring elder sister, or a romantic soul mate or an affectionate mother.

Islam has given enormous respect to a woman or a new born girl child.  Islam has givnen the right of inheritance to girls, his own daughter Hazrat Fatimah was the most noticable woman in the history of Islam. Islam gave the freedom of speech and opinion to women, so they can become a strong part of their society. In the ancient Arab before the Islam came, the Arabs used to be aggrieved on the birth of a girl child and felt shame when a girl was born in a family. A girl child was supposed to be a bad news in the ancient Arabs. But Quran came and Islam rejected that belief.

Through scathing locutions, Almighty Allah restrained such a savagery, and admonished them “And when the girl-child that was buried alive is asked, for what sin she was slain!” (Quran: 81: 8,9)

The girls are still treated in some parts of the world as a menace. The husbands treat their wives like slaves who gives birth to his children and cook food for the family.  It is evident from Prophet’s (PBUH) sayings that a daughter is bestowed as a path to eternal success for both mom and dad.

Prophet Muhammad And His Daugthers

Prophet Muhammad also had daughters, the most prominent ones were Hazrat Fatimah, Hazrat Umme Qulsoom, Hazrat , Hazrat Ruqqayah and Hazrat Zainab. He was so affectionate towards his daughters. In the early teenage, Hazrat Fatimah got married who has been a sublime guideline for  parents of all times.

Prophet Muhammad (PBUH) said: ‘Whoever had a daughter born to him, and he did not bury her alive or humiliate her, and he did not prefer his son over her, Allah (Subhanahu wa ta’ala) will admit him to Paradise because of her.” (Abu Dawud)

Prophet (PBUH), also told: “Whoever is tested with daughters and treats them well, they will be for him a shield against the Fire of Hell.” (Bukhari Muslim)

About birth of a girl in Islam. A daughter is like a fresh spring of water and makes life amazing, her eyes sparkle in the tough times to bring you a shadow of joy. Islam has given them full rights and prohibited their killing and abuse.